Coronavirus: Tokyo Olympics is FINALLY postponed for a year

The Tokyo Olympics were finally postponed for a year after Japan called for a delay due to the coronavirus crisis.

The Games are expected to be rescheduled for later than 2020, but no later than the summer of 2021, the International Olympic Committee said in a statement.

The name of the postponed Olympics will still be Tokyo 2020, Tokyo Governor Yuriko Koike said today, adding that the Games will be held next year.

Koike made the comment to reporters after she and Prime Minister Shinzo Abe spoke with the head of the International Olympic Committee, Thomas Bach.

Prime Minister Abe said, after his telephone conversations with Bach, that he requested a postponement of about a year "taking into account current circumstances" and to ensure an environment in which athletes can perform at their best and in the best conditions. sense of protection and safety for athletes. public.

In the photo: A man wearing a mask passes the Tokyo 2020 Olympic Games logo, displayed in the Tokyo Metropolitan Government building. The Games are expected to be rescheduled for later than 2020, but no later than the summer of 2021, the International Olympic Committee said in a statement.

Bach said the new dates for the first Games to be postponed during peacetime will be decided by an IOC panel that oversees the Games and Tokyo organizers.

Abe had previously said that a postponement was inevitable if the 2020 Games could not be fully realized amid the virus's pandemic.

The IOC and the Japanese government announced that they would hold a month-long consultation before making a final decision, but there was a rethink as more and more voices joined the chorus of postponement requests.

On Monday, former IOC board member Dick Pound said the Swiss body appeared to have decided to postpone the event, probably for a year, due to the virus. 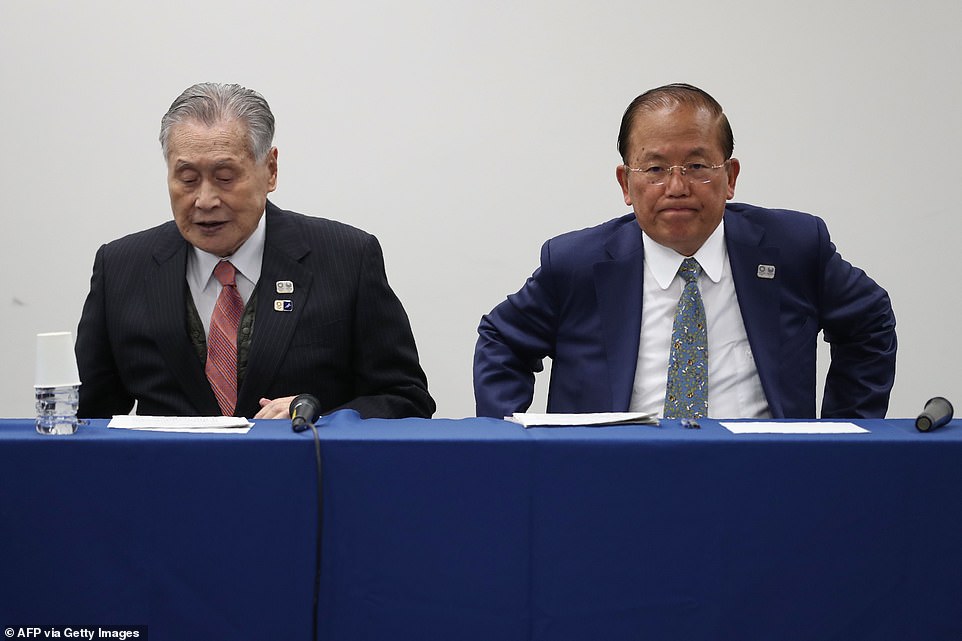 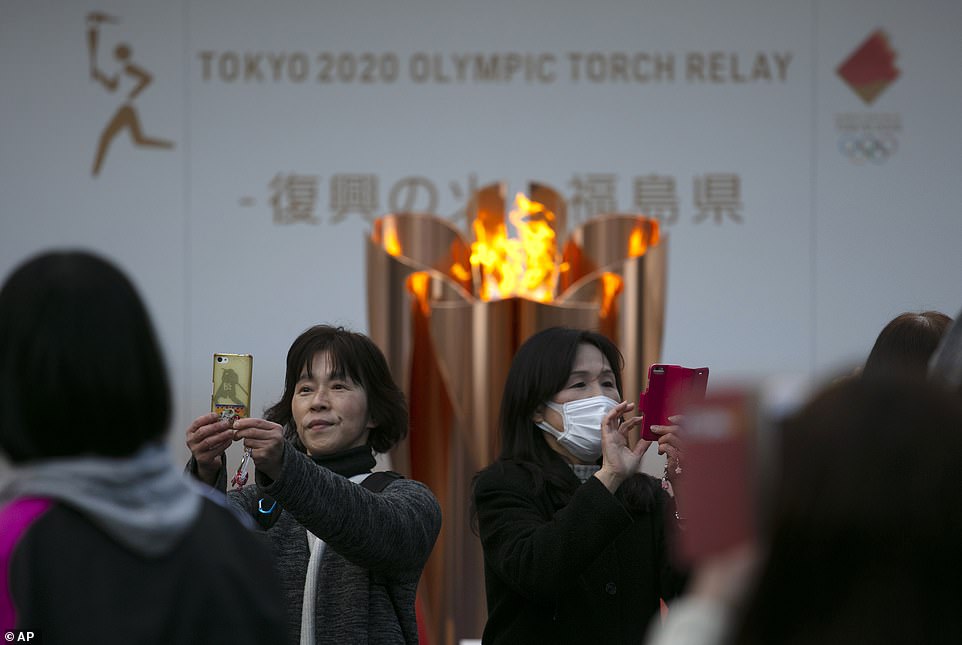 The Olympic flame burns during a ceremony in the city of Fukushima, Japan today. The torch relay that was supposed to start on Thursday has also been canceled 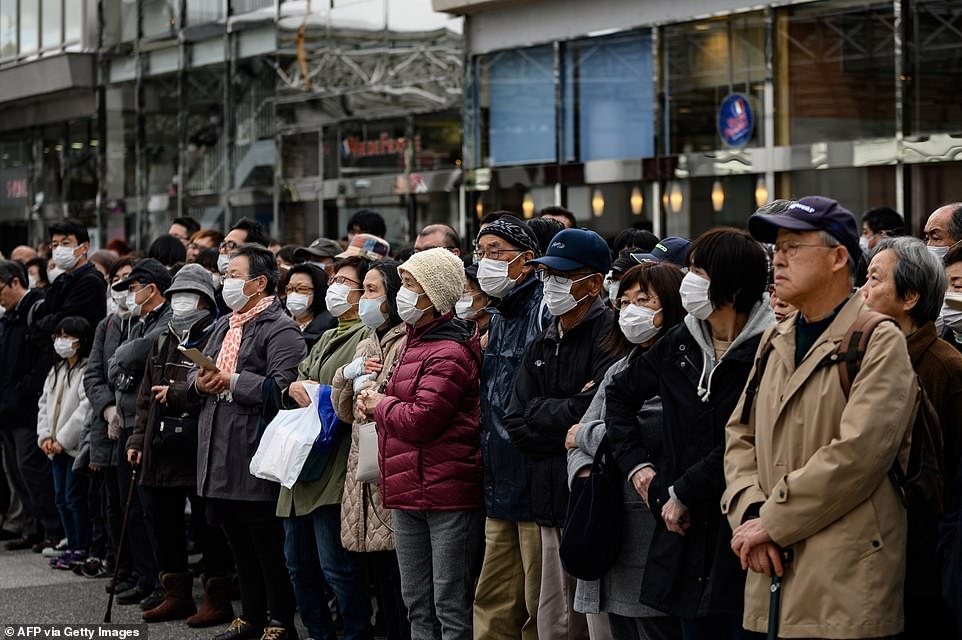 The Tokyo Olympic torch relay – which was due to start on Thursday, as planned in the northeast prefecture of Fukushima – will now also be canceled.

What will be the impact of the postponement of the Tokyo Olympics on Japan's GDP?

The coronavirus pandemic has already helped push Japan into a recession, with GDP contracting 1.8% in the quarter from October to December.

Economists at research firm Fitch on Monday revised their growth forecast for Japan in 2020 to -1.1 percent, from -0.2 percent, reflecting the risks to consumption, tourism and exports posed by the pandemic.

But he said the postponement of the Games could significantly worsen the situation and could impact GDP by between 0.5 and 0.8 percentage points to our forecast.

It is also unclear what effect this may have on the 240 billion yen ($ 2.28 billion) in spending by foreign viewers who are expected to participate in the Games.

Tokyo 2020 organizers refuse to say how many foreign visitors expect to visit Japan specifically to watch the sporting action.

So far, 4.5 million tickets have been sold in Japan, with around 7.8 million being sold in total, 20 to 30% of them internationally.

It is not yet clear how the postponement will affect these tickets.

Economists at SMBC Nikko Securities said on Tuesday that postponing the Games would reduce the country's GDP this year by about $ 6 billion. But they added that the same amount would be won when the Games are held, effectively canceling the losses.

There was supposed to be an Olympic flame – which arrived on March 12 from Greece – carried in a flashlight and carried by a vehicle along what the organizers hoped were empty roads.

The Olympics have never been postponed before, although they were canceled in 1916, 1940 and 1944 during the two world wars.

It is not yet clear what will happen to ticket holders hoping to participate and how the refund process will work.

In response, British Paralympic record launcher Dan Greaves tweeted: & # 39; Absolutely the right decision to postpone the Olympics and Paralympics for a year. Health comes first, so athletes can now take care of them to ensure they are able to put in the hard work! & # 39;

The coronavirus outbreak has infected more than 377,000 in 194, according to a Reuters count on Tuesday morning, with more than 16,500 deaths linked to the virus.

Efforts to contain it have led to major travel, commercial and social restrictions, which have also hampered the ability of many athletes to prepare for the Games.

Canada and Australia have already said they would not send teams to Tokyo if the Games were as scheduled for this year, while Britain said it would likely follow suit after meeting with sports officials on Tuesday.

The United States Olympic and Paralympic Committee said it heard feedback from athletes and was encouraged by a clearer path towards deferral.

"Even though current significant health concerns can be alleviated by the end of the summer, the huge disruptions to the training environment, doping controls and the qualification process cannot be satisfactorily overcome," the USOPC said in a statement. in this Monday.

The United States is by far the most successful country in the history of the Games, while the rights negotiated with the American broadcaster NBC to televise the Olympics represent 50% to 70% of the IOC's total annual revenue.

Tony Estanguet, head of the organizing committee for the Paris Olympics in 2024 and a member of the IOC, also said that a delay in the 2020 Olympics is likely.

"Today, the Games are not the priority, the priority is health, and that is how the world of sport contributes to this international solidarity," said Estanguet on France Info radio.

Japan and the IOC had previously said that canceling the Games altogether is not an option, but a delay would present major logistical difficulties, given the crowded world sports calendar and other commercial considerations. 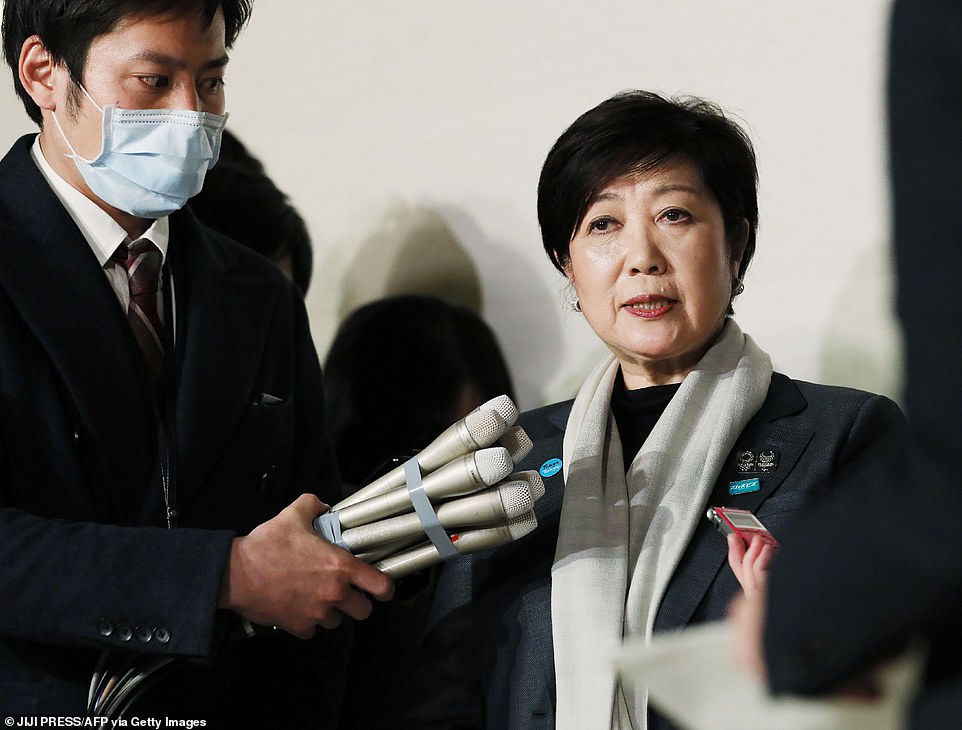 The name of the postponed Olympics will still be Tokyo 2020, Tokyo Governor Yuriko Koike (photo) said today, adding that the Games will be held next year 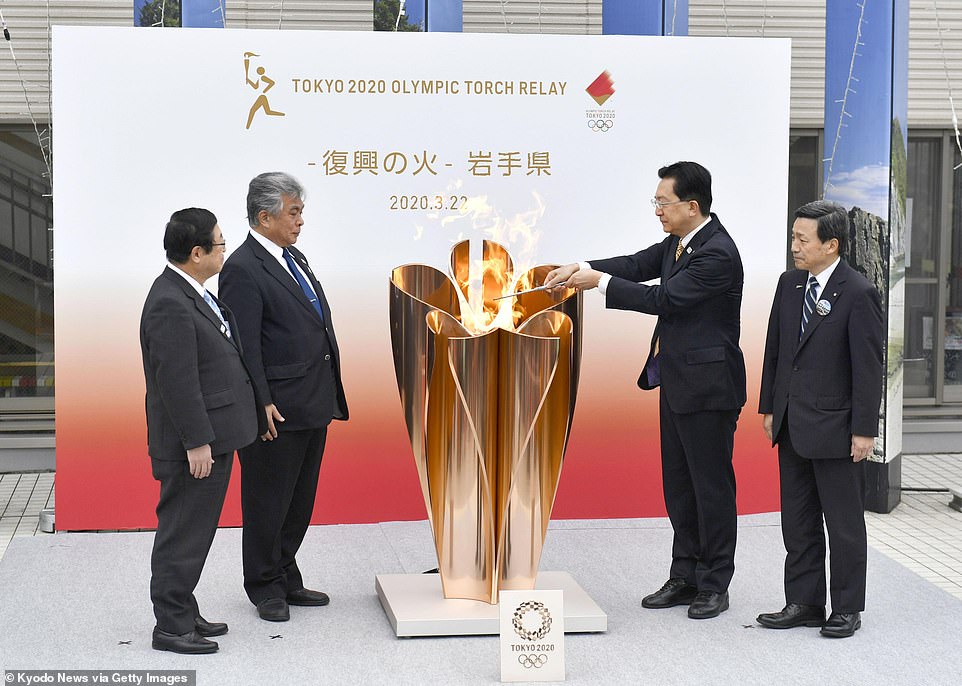 Photo: A ceremony is held at Miyako Station on the Sanriku Railway in Iwate Prefecture on March 22, 2020, marking the departure of the flame for this year's Tokyo Olympics, on a tour of northeastern Japan 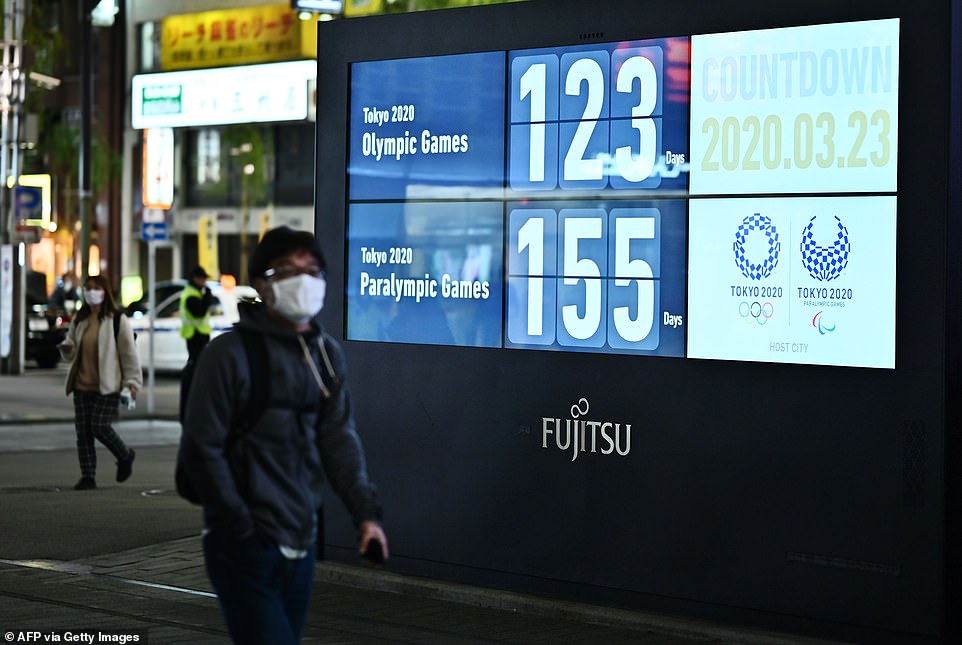 Photo: A man wearing a face mask, amid concerns about the COVID-19 coronavirus, passes a screen showing a countdown to the start of the Tokyo 2020 Olympic Games in Tokyo 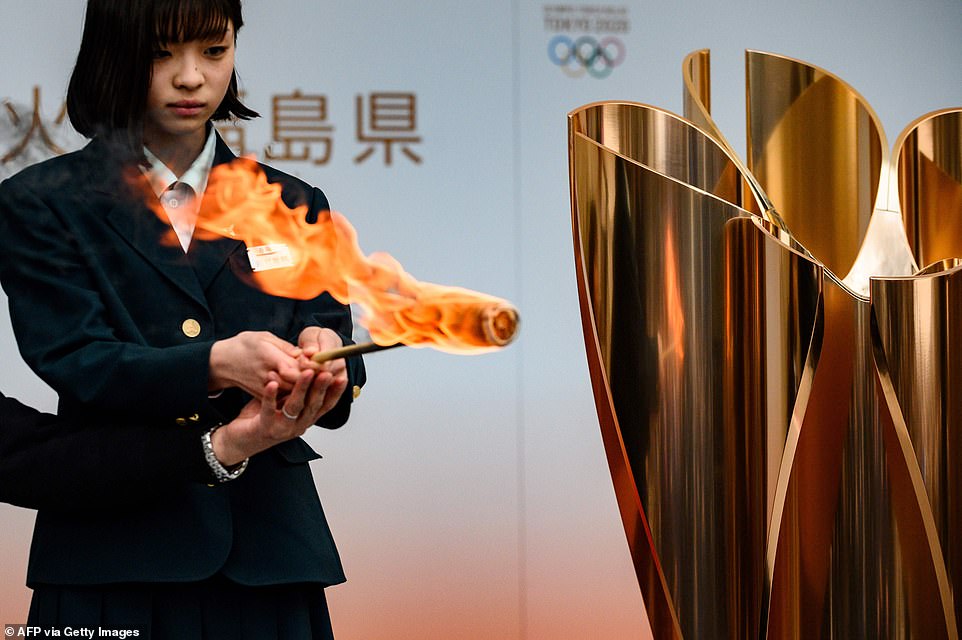 The Tokyo Olympic torch relay, which was due to start on Thursday at Fukushima Prefecture, has also been canceled

World Athletics said on Monday it would be willing to change its 2021 world championship, scheduled for August 6-15, in Eugene, Oregon, to make way for the 2021 Olympics.

Which sectors will be affected by the postponement of the Tokyo Olympics?

According to analysts at Capital Economics, a key factor to consider in terms of how a postponement can affect the Japanese economy is that most spending has already taken place.

This means that the effects of spending, mainly on building new sports venues, have already been included in GDP in recent years.

But a postponement could hurt tourism and general consumption in the country, already under pressure after a controversial increase in sales taxes last year.

Tourism in Japan was already struggling before the coronavirus pandemic, amid a diplomatic dispute with South Korea that led to boycotts. South Korea's visitors made up the second largest contingent of tourists in Japan, behind China only.

And with the virus outbreak, Japan suffered an additional drop in South Korean numbers, as well as a drop in travelers from China, who together accounted for almost half of the country's 31.9 million foreign visitors in 2019.

In February, the number of foreign visitors to Japan fell 58.3% compared to the previous year, with an 87.9% decrease in tourists coming from China, official data show.

Japan has an industrialized and diversified economy that does not rely heavily on tourism, with foreign visitor spending accounting for just 0.9% of GDP in 2018, according to the economic research organization CEIC.

But, with domestic spending already weak, the impact of a postponement may have an impact on the economy and further depress local purchases.

A wave of concern among athletes – who are already struggling to train while gyms, stadiums and swimming pools close around the world – seemed to be tipping the balance for this result.

"I rode not just a roller coaster, but the whole theme park of emotions," said Keesja Gofers, part of the Australian women's water polo team, on Instagram.

& # 39; I am relieved. Athletes from around the world will now have the chance to prepare properly and the Olympics can, at any time they are held, continue to be a meeting of the best in the world in the best possible way. & # 39;

As of Tuesday, Japan had 1,128 confirmed cases out of 42 deaths attributed to the coronavirus. The situation in Japan seems almost normal, with ordinary daily activity continuing, a stark contrast to Europe and the United States.

A postponement of the Olympics would be a blow to the host country Japan, which …