Island states have had an outsized influence on climate policy

When Hurricane DORIAN crossed the islands of Abaco on September 1, with winds of 300 km / h and elevations of almost eight meters at sea, it was as powerful as any Atlantic storm that hit the earth. The destruction it caused was devastating, and the death toll is considered "impressive." Dorian's devastation drew attention to the vulnerability of small islands. It is, laments James Cameron, head of ODI, a development think tank, "a vision of the future."

The fear is that rising global temperatures will lead to more extreme storms and rising sea levels, threatening the very existence of small island states and low-lying coastal regions. They are vulnerable not only to the violent climate, but also to loss of livelihoods as farmers and fishermen feel the effects of warming. Eventually entire islands may become submerged. More than half of the Maldives' territory is less than one meter above sea level. "We are the most impacted and are continually leading the way by example, advocating and persuading others to increase their ambition to tackle climate change," says Thilmeeza Hussain, Maldives ambassador to the UN.

Small Island Developing States (SIDS) account for less than 1% of global emissions of GDP, territory, population and greenhouse gases. In most matters, his voice barely registers on the world stage. However, on climate issues, they have become, over three decades, an effective lobby.

Cameron was part of a small group of young British lawyers who helped them come together. In 1988, he wrote Greenpeace legal advice on whether the United States could be brought before the International Court of Justice for failing to act on climate change. He concluded that such a case would be difficult to propose, since the United States would refuse its jurisdiction, but that the arguments for evidence-based state responsibility could and should be presented in an international treaty. Along with the most affected states, he and others pressed for one. This led to the formation of the Alliance of Small Island States (AOSIS) in 1990.

At the 1992 Earth Summit in Rio de Janeiro, Cameron had his treaty – the United Nations Framework Convention on Climate Change. AOSIS has grown to over three dozen members and has gained recognition for representing a distinct set of interests. Today, its 39 effective members and five observers are spread across three regions (Caribbean, Pacific and a group covering the seas of Africa, India and South China) and include some low-lying coastal countries such as Belize and Guyana. Individually, they have limited means: when Fiji chaired the global annual climate meeting in 2017, it had to be held in Bonn. But their collective influence has been great.

"AOSIS has put the climate crisis on the map long before anyone gets serious," says Mark Lynas, writer and consultant for the Maldives government. Island states were the first to feel the impact of rising sea levels. They were in danger of being drowned by the carbon emissions of the richer countries – and they told them. "They were incredibly successful in changing the tone and influencing politics," says Lynas.

They have managed to include the wording in climate agreements that address their specific concerns – about climate change losses and damage, for example, or the need for financial support to adapt to them. In the 2015 Paris agreement, the inclusion of an aspiration to restrict global warming to 1.5 ° C above pre-industrial levels (beyond the 2 ° C target) was "almost entirely from SIDS and other developing states." development, "according to Mr. Lynas. More generally, island states have offered an example of organizing and promoting international collaboration in an area where joint action is the only way to make a difference.

On September 27, a full day will be dedicated to SIDS at the end of the UN General Assembly in New York. Leaders will review the progress of SAMOA Pathway (short for SIDS Accelerated Modalities of Action Pathway), a plan for sustainable development that emerged from a summit in Samoa in 2014.

Why the big impact? SIDS have three things in their favor. One is the focus: survival focuses the mind. Maldives' Hussain estimates that he spends 70 to 80 percent of his time on climate change and sustainable development.

Second, their moral argument punches. Islanders have been adept at pointing out the danger they face, with phrases like "Save Tuvalu, Save the World" and "1.5 to Stay Alive." Just before the Copenhagen climate summit in 2009, the Maldivian government held an underwater cabinet meeting.

Island leaders do not measure their words. Attend the recent Pacific Island Forum summit in Tuvalu. Australia, one of the group's 18 members, insisted on removing references to coal in the final statement and softening the language. Tuvalu Prime Minister Enele Sopoaga scolded his Australian colleague Scott Morrison: "You are concerned about saving your economy in Australia … I am concerned about saving my people in Tuvalu." Mr Sopoaga reported that during the meeting Tonga Prime Minister Akilisi Pohiva (who died this month) "really cried".

Third, crucially, SIDS have strength in numbers. Together they represent about one third of all developing countries and one fifth of UN members. This gives them ample time to speak and voting power at the UN.

Kevin Conrad, who became an activist after seeing beaches disappear at home in Papua New Guinea and now heads the Tropical Forests Nations Coalition, recalls the drama of the 2005 Montreal climate summit. More than 20 countries spoke in support of greater efforts to reduce greenhouse gas emissions than the US was resisting. The timing worked: "Building broad coalitions is what wins," he says.

Conrad got involved in more drama two years later at the UN climate conference in Bali. Once again, the US was resisting consensus, this time for a plan for a new climate treaty. Speaking as a representative of Papua New Guinea, Mr. Conrad addressed the United States: “We seek your leadership, but if for some reason you are unwilling to lead, leave it to the rest of us; please get out of the way. At a time that fell into the tradition of climate diplomacy, the US soon announced that it would enter into consensus.

There is no chance of a similar moment at the UN Secretary-General's Climate Action Summit in New York on 23 September. President Donald Trump is unwilling to reverse his decision to remove the United States from the Paris agreement. But island states are still hoping to take a dip in New York next week and have put together a "SIDS package" to be presented there.

To begin with, they want to highlight the need to heed the warnings of the Intergovernmental Panel on Climate Change (IPCC) about what is needed to limit global warming to 1.5 ° C. In a report published last October, the IPCC highlighted the difference in impact between limiting the heating to 1.5 ° C and letting it rise to 2 ° C; it would take drastic action over the next decade to have any hope of achieving that. Islanders are demanding increased ambition. They hope to see the biggest carbon emitters publicly accepting the IPCC report.

They also want to show how bold actions can be taken. "SIDS have absolutely nothing to do with this mess in which we are involved in climate change, we contribute less and yet we want to follow suit," says Lois Young, UN ambassador to Belize, who took over this year from the Maldives. as president of AOSIS. They want to switch to 100% renewable energy and chart a path to carbon neutrality. The Marshall Islands paved the way to come up with a plan to become carbon neutral by 2050.

No island is an island

Such plans are expensive, as is the investment needed in such things as reinforced ports and desalination plants to adapt to climate change that island states are already seeing. Therefore, mobilizing finance is another priority. SIDS complain that the money promised so far is inadequate and often tied up in bureaucracy. In New York, they want firm commitments from the big countries. 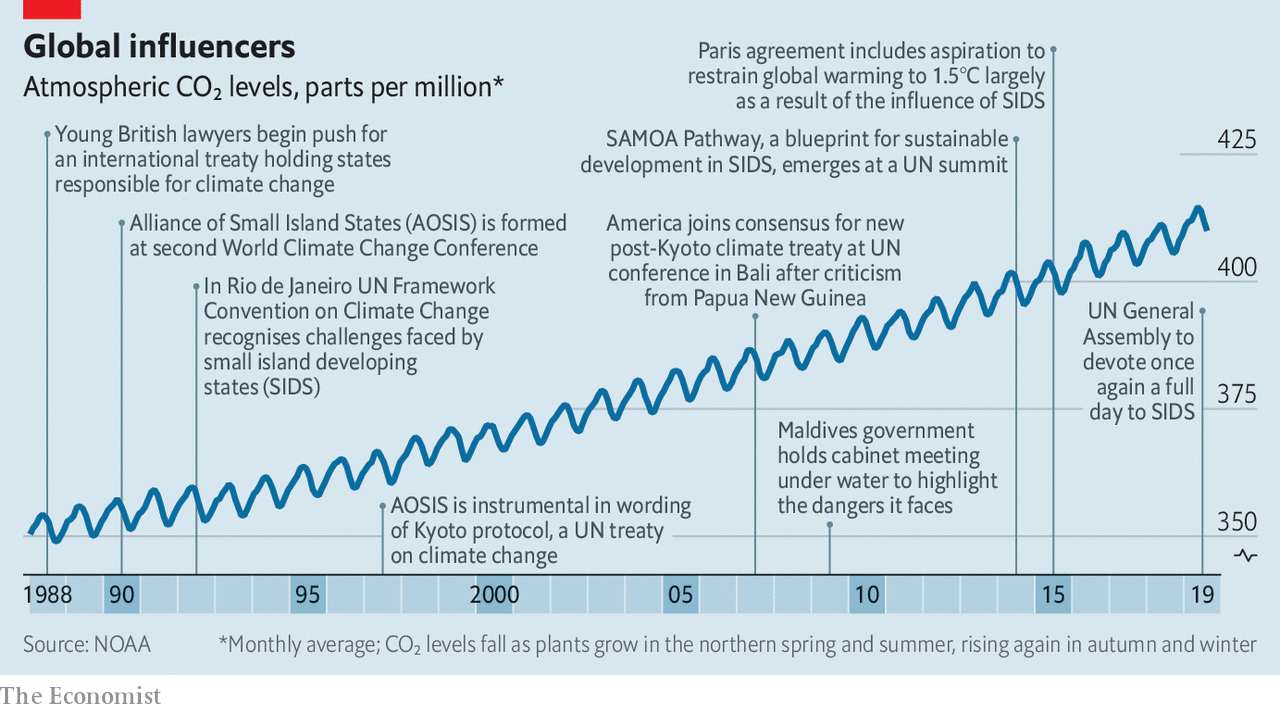 As impressive as their diplomatic efforts have been, island states face more struggles. Keeping the world's attention is not easy. Belize has been working hard to convince world leaders to attend SIDS Day on September 27. Climate outrage spread and other groups of countries crowded. For island states, broadening climate concerns are welcome, but it means that their own leaders are less often the main spokesmen.

AOSIS remains broadly united in its message and strategy. But its members are affected by climate change in different ways, so that divisions can emerge. Counselors pushing for climate radicalism and those who prioritize development tasks do not always meet.

Nor is it clear that island states are winning the diplomatic struggle. Apparent victories in public forums can be defeated in subsequent bureaucratic battles. As the discussion with Australia in Tuvalu shows, and as the arguments suggest before next week's review of SAMOA Pathway, island states still have to discuss language that reflects the scale of action needed.

Above all, the threat did not disappear. In the long run, extinction still beckons, as the world has done very little to contain greenhouse gas emissions. "Adaptation can only go so far when your country is sinking," says Lynas of the quagmire countries. If the moral case does not work, some say, it is time for a new strategy, for example by embracing radical technologies such as climate engineering.

Otherwise, in some small island states, the future may involve negotiations with …

Portuguese at the forefront of psychological...