Home sci-tech Watchmen: Everything You Need To Know Before You Watch The Series

Watchmen: Everything You Need To Know Before You Watch The Series

Watchmen will debut on HBO on the 20th and will feature the sequel to one of the most important comics of all time. Created by Alan Moore and art by Dave Gibbons (and colored by John Higgins), the story has elements of noir narrative, offers a fresh approach to the Cold War and the Vietnam War, and touches on sensitive topics such as loneliness, rape and other types of violence, subjects not normally seen in comics.

The legacy of the comic can be felt to this day not only by its aesthetic influence but also, and most importantly, by the way the format has come to be regarded as adult entertainment. Watchmen has been placed on Time Magazine's 100 Best Novels List, being the only comic to make the list (you can check out the full selection) clicking here).

HQ won a movie adaptation in 2009, directed by Zack Snyder, but the HBO series will show the sequence of the original work, with a different ending to the film. To prepare for what's next, learn some of the key features of this graphic novel that should appear in the series.

Attention! The following text contains spoilers of the comic and the movie Watchmen.

HQ vigilantes do not have an official name. References to the term Watchmen appear on some pages, but they are never treated directly by that name. The group is composed by Rorschach, who tells the main part of the story and is the only one who does not accept to retire; Comedian, a Vietnam War veteran and a person who doesn't have a moral filter, killing and raping without any remorse; Spectral, the only woman in the group and the daughter of a retired vigilante; Doctor Manhattan, a physicist who, after an accident in his laboratory, becomes omniscient, omnipotent, and in his own way omnipresent; Owl, an inventor who has taken on the name of a watchman of the past; and finally Ozymandias, one of the most intelligent men on the planet. 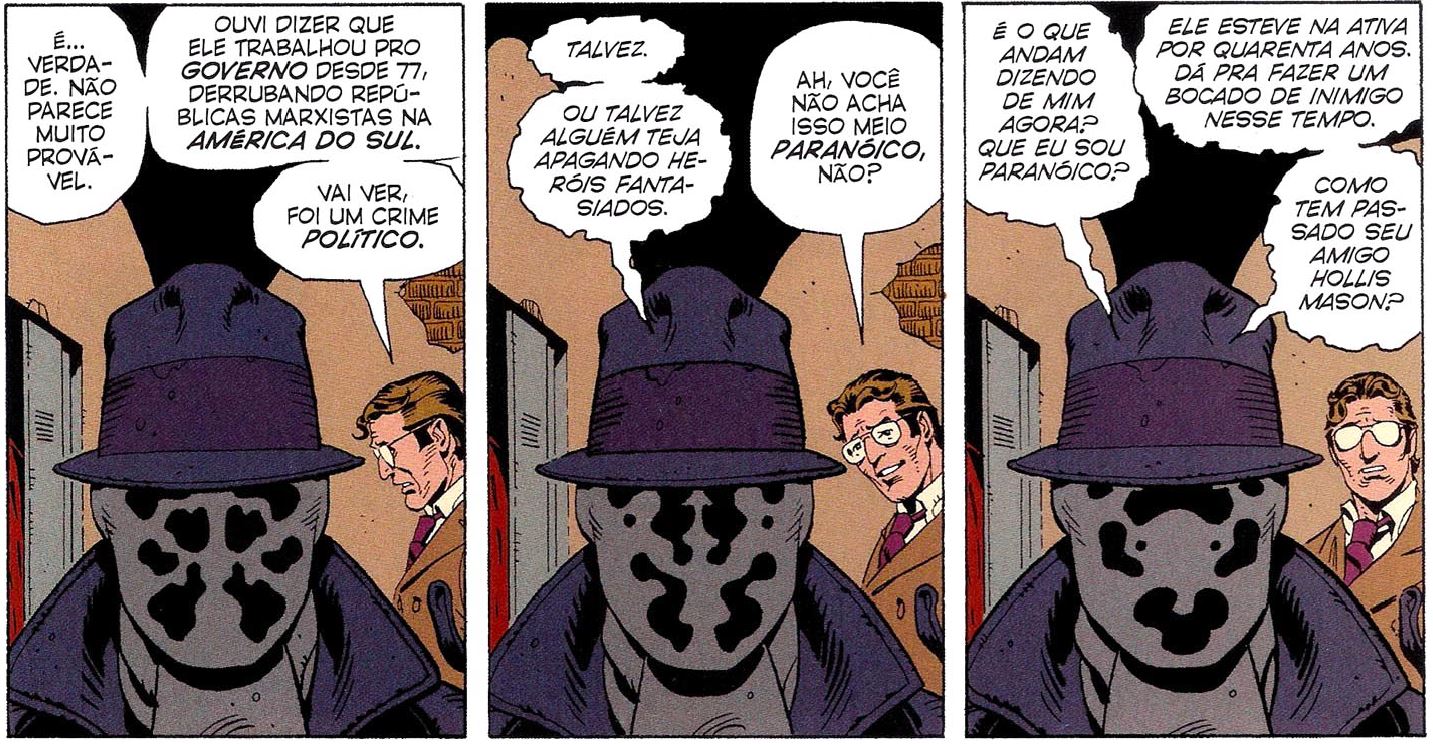 The story takes place in 1985 and follows the vigilante group in an alternate version of the United States, which won the Vietnam War thanks to the help of Doctor Manhattan. Rorschach is investigating the Comedian's death for believing someone is trying to kill the old masks. He goes after his companions to warn them and finds himself in the middle of a great conspiracy initiated by Ozymandias. At times flashbacks of characters are shown to give more depth to the story. 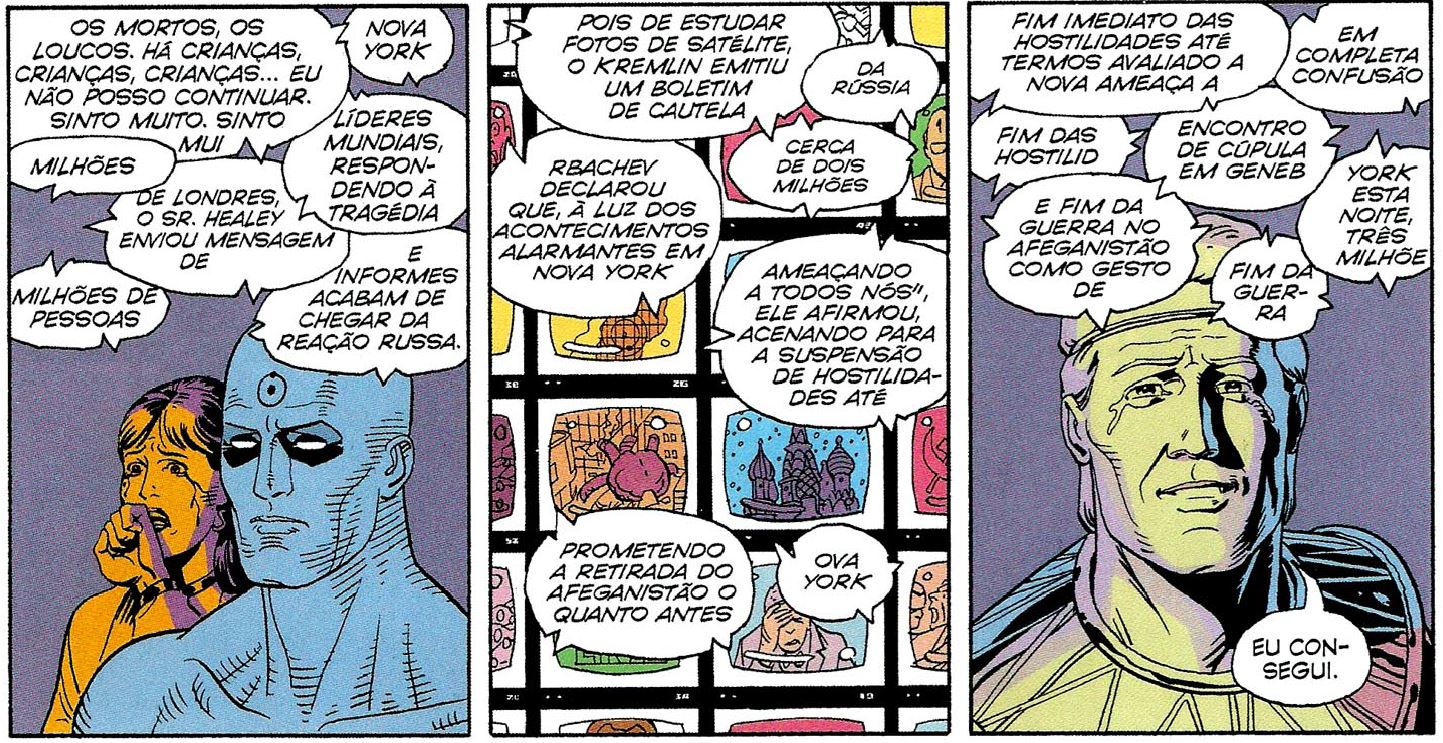 All Rorschach's investigation makes him realize that the one who killed the Comedian was Ozymandias. He created a monster that attacks Manhattan, destroying much of the city and killing millions. The goal was to get the United States and Soviet Union to end the Cold War and to unite against a larger enemy (in the movie, Ozymandias makes it look like Doctor Manhattan caused a nuclear explosion). As the Comedian discovers the plan, Ozymandias decides to kill him so as not to leave clues.

This objective is revealed in the latest issue of the comic, when all watchers are informed that the monster has already attacked the city and there is nothing else they can do. Rorschach says he cannot accept it and will reveal to the world what Ozymandias has done, but Doctor Manhattan disintegrates it, for the most important is world peace. Watchmen ends with the Rorschach diary being handed to a newspaper so that all that has happened is revealed. The HBO series should show the consequences of this.

Tales of the Black Freighter

While the story is told, Alan Moore inserts a parallel narrative, with a boy reading a Black Freighter comic. This plot appears only in some editions and serves as an analogy to the main story itself. In Tales of the Black Freighter, a young man decides to return to his hometown to warn his countrymen that the mysterious ghost ship known as the Black Freighter is going to attack the place.

The story involves Ozymandias and Rorschach. In the trailers released by HBO, you can see some references to the Black Freighter, suggesting that it will be related to the main plot.

Watchmen changed forever how comics were made and consumed. Two years after its release, Neil Gaiman began publishing Sandman, already showing the impact Moore's work has left. Since then, it has become increasingly common for comics to tackle heavier and more complex themes, exploring other niches and with increasingly elaborate ideas.