Western firms have little to lose from a Middle Eastern war 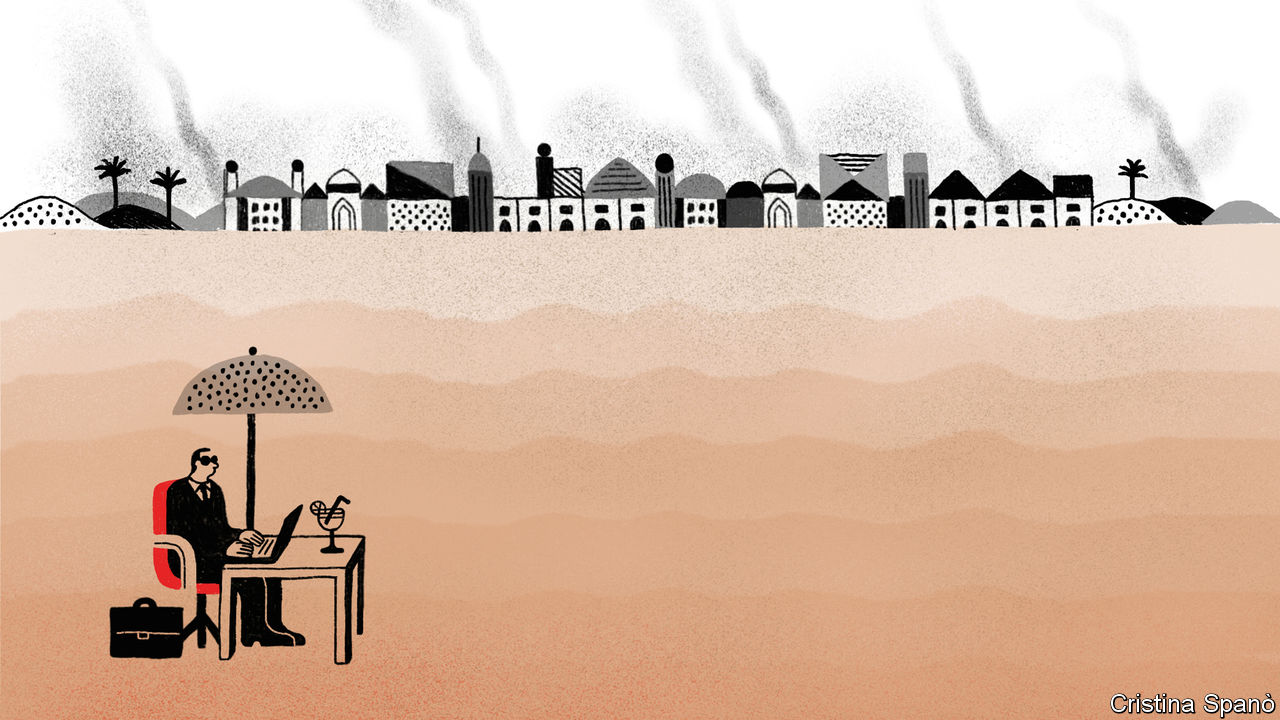 The MIDDLE EAST is not the only powder keg in the world. But that pisses off Western strategists more than other volatile places. Western investors also pay close attention. World stock exchanges shuddered on January 3, after an American missile killed Qassem Suleimani, one of Iran's top commanders in Iraq. They rocked again this week after Iran first threatened and then attacked US bases on Iraqi soil.

War anywhere is bad for business. An outbreak in the long conflict between the world's largest economy and a proud power in a region whose deep oil reserves lubricate the wheels of global trade create enough uncertainty to make the world's leaders uneasy. The inevitable rise in oil prices, which gained nearly 5 percent after the US strike, has hurt companies like airlines that use a lot of oil. Countries in and around the Persian Gulf are a market of 230 million consumers. Neighboring Egypt and Turkey, often scorched by regional conflagrations, add another 181m.

For all its apparent geopolitical significance, the Middle East is an afterthought in many western corner offices. Barring some oases, mostly in energy, aerospace and defense, the region looks like a multinational desert.

Decades of US sanctions mean no America Inc presence in Iran. Fearful of angering Washington, many European and Japanese companies have also moved away. France's PSA sold many Peugeot and Citroëns in Iran's large market, but withdrew from two joint ventures in 2018 to avoid US sanctions after President Donald Trump repositioned those raised as part of a deal to curb the nuclear program. from Iran.

Even beyond Iran, the region barely registers in the profit and loss statements of multinationals. The Middle East and Africa accounted for 2.4 percent of revenue for US listed companies in 2019, according to Morgan Stanley, a bank. For European and Japanese companies, they were 4.9% and 1.8%, respectively. The Middle East still buys comparatively few cars in the world (2.3 million out of 86 million sold globally in 2018). Street vendors of luxury goods such as Prada, an Italian label and L'Oréal, a French beauty giant, register 3% of sales in the Middle East (not counting sheikh shopping trips to Milan or Paris).

The overall regional footprint of Western finance seems equally small. By the end of 2018, the major US banks had $ 18.5 billion in lending and trading activities in the region, equivalent to 0.2% of their assets. This includes JPMorgan Chase's $ 5.3 billion business in Saudi Arabia and Citigroup's $ 9.6 billion exposure to the United Arab Emirates (UAE). European banks are withdrawing, if anything at all. France's BNP Paribas sold its business in Egypt seven years ago and earned $ 121 million ($ 143 million) in the Middle East in 2018. HSBC has $ 58.5 billion in Middle East assets, though this still a rounding error in loans from the UK lender. Balance of $ 2.7 billion. On the other hand, Chinese banks have been expanding their operations in the Gulf – albeit from a much lower base. Last year, Bank of China strengthened its presence in the United Arab Emirates and, on January 7, gained a license to open an branch in Saudi Arabia, joining Industrial and Commercial Bank of China there since 2015.

The biggest pocket of fertility in this dry corporate scenario – and therefore the most obvious victim of any escalation – is the energy sector. Over the past century, American and European oil tankers have moved in and out of the region as a result of sanctions, conflicts, and government appetites for foreign partners.

In the short term, a conflict-driven rise in oil prices could boost the profits of geographically diverse producers in the West. In the long run, the image looks more hazy. Despite America's shale boom, many oil giants remain knee-deep in Arab oil. In 2018, the Middle East and Africa accounted for a quarter of the total production of Total, a French company. ExxonMobil has invested about $ 6.5 billion (and counting) in a giant Emirates oil field. By 2024, it expects to produce 1 million barrels of oil per day in the country, equivalent to about a quarter of its total oil and gas production by 2018. Service companies, which work for supermajors and national oil companies, are disproportionately dependent on the Middle East. Halliburton's contract with Saudi Aramco in 2018 was the largest of its kind in the region, the company said. Schlumberger also has a lot of business there.

Iraq, in particular, welcomed foreign capital in an attempt to increase production after years of conflict. In 2009, BP and PetroChina were awarded a contract to work with a state-owned Iraqi company to increase production in the Rumaila field. It currently produces 1.5 million barrels a day, a third of Iraq's total. ExxonMobil, Eni and Chevron also have Iraqi projects. They are at risk if Washington breaks sanctions against Iraq, which could be done if its government expels US military forces after the assassination of General Suleimani. Many companies are evacuating employees, fearing anti-American reprisals.

Some non-energy companies will also be watching the conflict with caution. LafargeHolcim, the largest Swiss cement producer in the world, owns 44 factories in the region, generating 11% of its revenue in 2018. Heidelberg Cement, a German rival who also profited from the construction boom in the region , derives 19% of its sales from the Middle East and North Africa. GE sells $ 16 billion worth of machines a year in and around the Middle East, 13 percent of the group's total sales (see chart).

Boeing and Airbus also look vulnerable. About 5% of the global air fleet is operated by Gulf carriers. The continued expansion of Emirates, Etihad and Qatar Airways has made them major buyers of passenger jets in recent years. Airbus estimates the region will receive 8 percent of all new aircraft over the next 20 years – about 3,200 jets. Emirates is a launch customer of Boeing's new 777X, which is expected to go into service this year, with orders of about 125, more than a third of the current total. It also ordered 30 787 and from Airbus 40 A330 and 30 A350.

Another industry has a large foreign presence in the region. Endless wars and oil wealth conspire to make the Middle East the world's second largest export market for arms manufacturers after Asia Pacific. As gun sales have dropped in all other regions over the past decade, they have nearly doubled in the Middle East, estimates SIPRI, a think tank. Saudi Arabia alone spent $ 68 billion on weapons in 2018. Bahrain, Kuwait, Oman, Qatar and the United Arab Emirates are also enthusiastic buyers. The region received half of US exports in 2014-18 and is also a major market for British, French and German defense companies. Americans Raytheon and Lockheed Martin, Britain's BAE, and France's Dassault all saw their stock prices rise as tensions mounted. If your business is war, war is good for business.

This article appeared in the Business section of the print edition, titled "Western companies have little to lose from a war in the Middle East."